So, I’m officially a day late in posting.  As I was baking the bread last Friday I remember thinking how appealing the next week was looking, I was going to have some much needed free/practice time before an audition the next weekend, and oodles of time to make this first post just perfect before posting.  But then life happened, loved ones I haven’t seen in a long time happened to be in town, and our ten month old, 50 pound puppy decided this would be the week she would start trying to pull down the shower curtain, tear apart the duvet and generally wreak havoc to anything covered in fabric if she wasn’t getting enough time to expend all of her energy at the dog park.

Fortunately I had the foresight to at least bake the bread last week, generally I’m a terrible procrastinator.  I haven’t made a lot of yeast breads, in general they have scared me.  But, I got a lot of comfort from the specificity in the way the recipes are written, thank you Dorie Greenspan, and for once I made sure I had plenty of back up ingredients so that if I had to start over I could. 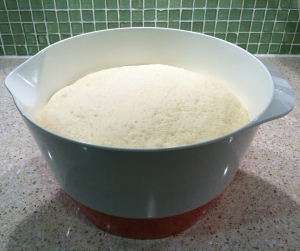 The bread turned out well despite the fact that the dough came together a bit quicker than I thought it would in the mixer and I think I did end up adding a bit too much flour.  Next time around I would definitely eliminate a half a cup of the flour and then start the tablespoon by tablespoon until it comes together.

It has been delicious toast in the morning, but I have to say I am looking forward to the other breads and tasty pastry that are to come a bit more!

08 Feb This entry was published on February 8, 2012 at 9:11 pm and is filed under Tuesdays With Dorie: Baking With Julia. Bookmark the permalink. Follow any comments here with the RSS feed for this post.

3 thoughts on “Tuesdays with Dorie: Baking with Julia 1. White Loaves (a day late)”